As MD, we support athletes in their development together with Talent Empowerment. Josine Koning is among ‘our athletes’. We asked about her experiences and how drives helped her receive this nomination.

Last year she became World Champion for the second time and added yet another gold medal to her already impressive record. In addition to these two World titles, 27-year-old Josine Koning is also a three-time European Champion (2017, 2019 & 2021) and the reigning Olympic Champion (2021) with the Dutch national team. In addition, Josine and the Orange ladies also won the Hockey World League (2017), the Champions Trophy (2018) and the Hockey Pro League (2020 & 2021). Yet, of all the final rounds Josine participated in, she and her teammates did not win the gold medal once that was last season’s Hockey Pro League. Add to that 7 National Championships (2014, 2015, 2016, 2017, 2018, 2021 & 2022) and 4 European club titles (3x EHCC, 1x EHL) with hockey club Den Bosch, and you can now rightly speak of a successful career. However, in addition to these team performances, a few weeks ago, there was a pleasant surprise: Josine was nominated for FIH Goalkeeper of the Year, the award for the best goalkeeper in the world. We asked Josine several questions about this individual nomination.

After an exceptional series of team awards, (you) now also have an individual nomination. How does that make you feel?

“It was actually funny. I heard that I had been nominated via the family Whatsapp group. So I didn’t know there was anything in the pipeline. But looking at the process of how you are nominated, where an expert panel makes a selection based on performance, I think it is very special that I have been nominated. Also, taking into account that as a goalkeeper of the Dutch national team, you play about half (Josine plays half of the game just like her competitor, red) and in addition, we have had the very best team in the world for years. And that generally makes it more difficult to assert yourself as a goalkeeper – even as a goalkeeper of the Dutch national team. The last time a Dutch goalkeeper was nominated was five years ago. And that I didn’t win it, that’s not really what it’s about for me. The last phase in which the winner is chosen is a substantial part of a public prize, and you often see that the winner comes from countries with many hockey fans. The fact that I was already nominated meant a lot to me. Our coach also texted me: ‘How nice that you are seen’. In the end, I train ten times a week to get 1 to 2 balls during the games. Then it’s cool to get the recognition for all those years of hard work in this way.”

What are key moments that have brought you to this moment? 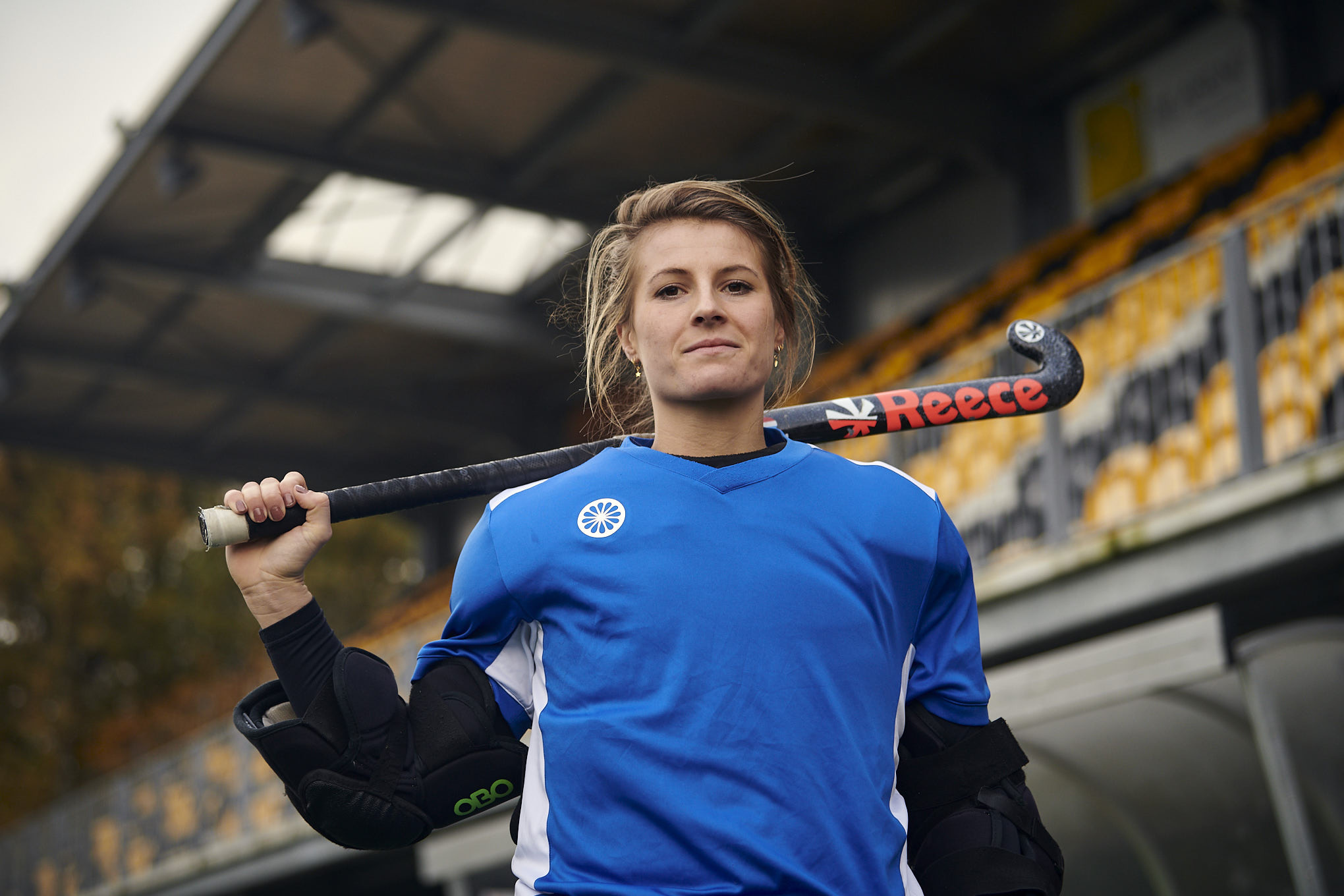 What are the most important lessons you’ve learned during your high-performance sports career?

“My most important first lesson is closely linked to the first milestone – the World Cup in London in 2018. Before this World Cup, I was really in a kind of victim mode. I was thinking, ‘why don’t they grant me this’, and ‘why don’t they choose me’. At some point, I made the switch and started looking at what I did have an influence on. Only then did I take ownership of my own process. If I want to get better, I have to make myself better and not let my development depend on external factors such as teammates, coaches, selection policy or the weather. If I make sure they can’t get around me, they can’t either. This realization, or rather, this choice, has really been a turning point for me. And I actually continued that line towards Tokyo. Only then did I dare tell myself I wanted to be the first goalkeeper. That’s when it became real. And finally, I also had a wise lesson from my goalkeeper coach, which I still say to my teammates sometimes. He always said you can’t always train for a “10”. Sometimes you just have a “7” day. Less good days are there for everyone. But then also getting those 7, that’s the goal. With this mindset, you ensure every day that you can get the most out of yourself and out of your training without making it hard on yourself with frustration.”

What role have your drives played in your career?

“An important one. Because by understanding drives, you start to recognise things in your own behaviour. And that enables you to consciously adjust your own behaviour, the situation or your environment. For example, I sometimes say to myself, “so, you are comfortable in the details again”, or vice versa, “now we first have to continue from structure”. And, of course, the insight that others have completely different profiles and that my need for a blue approach, for example, does not necessarily have to be shared by the others at that moment. I also recognise this when I look at my most important lessons learned. The planning behind my dreams was hugely comprehensive, and analytical. I was going to get all the peripheral things right, and I was going to quantify what goals I needed to achieve on fitness and fat percentage, for example. That’s where you see my blue and yellow drives reflected. But I also know that I can lose myself too much in that, with frustration as a potential risk. And as we know by now, last year, we had to have a lot of conversations in the team on an emotional level about what you need from each other to be able to perform. In those conversations, I also refer to my MD profile. I’m green, so I need harmony, having a good time together—the small conversations between the training sessions. If you can then make explicit what you need and what you don’t like, that naturally helps in such a process. Another example is when I’m very busy or stressed, my natural behaviour is to withdraw—just sit on the couch, analysing and then trying to solve it myself. While on the other hand, I know that being with family and friends gives me energy. Now that I know this, I consciously break this pattern. Then I choose to play with my little nephew for a while, and not to occupy myself with hockey, structure, analysing, and things like that.”

What else will your career bring you?

“My next real benchmark is the Paris Games in 2024. I so want to be there, and this time with friends and family around me. I put so much pressure on myself that (last time) I was very much in the “minus” energy. As a result, I had not been able to enjoy myself fully. I want to do that in Paris in two years if I am selected. Secondly, we are now also engaged in a new process with Den Bosch, because a number of important players have quit. I want to regain ownership of the team process without losing myself in endless structures and details. In addition, I am also looking for the social challenge, in which I want to continue to take steps so that this flows smoothly towards the end of my sportscareer. A year ago, I completed my Master’s degree in Law, and at the beginning of this year, I did an internship in Sports Law at CMS. In the coming period, I will do another project at the KNVB, where I will provide legal support to the Professional Football Clubs in the event of disorder. I am also looking forward to that immensely.”

Do you also want to know your drives? A Start session with Management Drives is a first step to discover the strengths and pitfalls of yourself and of your colleagues. With this means you can address and discuss behaviour in a positive and professional way.